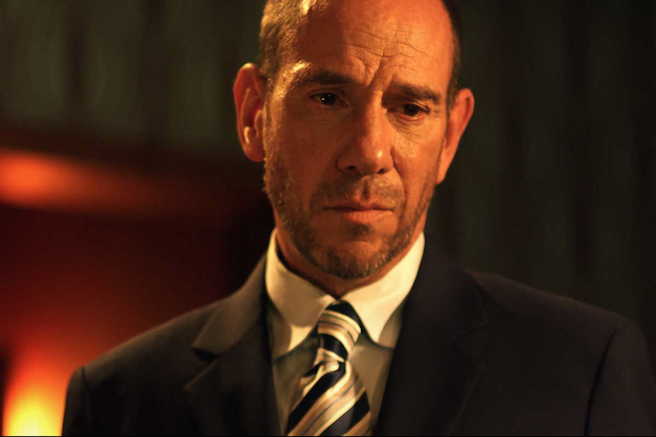 Unfairly Talented and 100% Deserving. My appreciation post for the Great Miguel Ferrer.

I feel extremely fortunate to have worked with Miguel Ferrer on Twin Peaks: The Return

For so many reasons. All of the impossibly wonderful things you hear about him are all true. Because most of my scenes involved him, I had the marvelous experience of getting to know his wit, thoughtfulness and charisma first hand.

It was easy to love Miguel. First, it was his eyes—warm, wise, and gentle. Then it was his voice—like the smoothest Scotch poured over jagged rocks. Then it was the stuff he said and the way he listened. Here’s the thing with Miguel: he’s a good guy. A sweetheart. Not a pushover, sharp as a nail—and you could feel it in his hugs; he was the real deal.

Twin Peaks was my first professional television acting experience(sometimes I sit and muse about how wild that is), and to say I was nervous and concerned about the quality of my acting (in particular while acting alongside the likes of Miguel and Laura Dern) is wildly understating it. Miguel knew I was a newbie, in a bit over my head, and he made sure to encourage me to keep my spirits high. That was certainly not required of him. But I was damn grateful. It went a long way for me.

Once while filming a super intense scene with David, Miguel and Laura, I had the final line that wrapped it up. I delivered it the best I could. David just gave us one maybe two takes for most all the scenes. After we shot, Miguel turned to me and said, “You really did a good job with that line! I saw it in the script and was glad I didn’t have to say it—it was a tough one.” Instantly my anxieties about my performance were lessened. Miguel is king of delivering Albert’s charged, deadpan and often technically complex zingers, and the line he was commending me for was a walk in the park in comparison. But he saw an opportunity to put my mind at ease, and he took that opportunity. Time and time again.

There is a work flow on the set of TV shows that everyone who has experience knows. I was not one of those people who knew the drills and it was painfully obvious on occasion. I am a quick study generally, but I was distracted by the fact that I was on set at all, and just trying to take it all in. There were times after a scene was wrapped that the actors were supposed to clear the area and break while the next shot was getting set up. But yours truly would just be awkwardly hanging on set with my wide eyes, heels and skirt suit, as the the crew busybodied around me. Do they still need me? Or am I in the way? More than once Miguel would come up to me after a scene and tell me we could break because he saw I was floundering. Bless his heart! 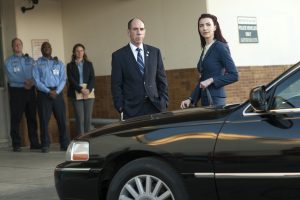 Miguel Ferrer and Chrystabell in a still from Twin Peaks. Photo: Suzanne Tenner/SHOWTIME

Sometimes we would sit in the actors chairs(they look just like the director’s chairs BTW, who knew?) and chat between scenes. I enjoyed our conversations immensely. I mostly listened because he had such great stories to tell and graciously educated me about fascinating aspects around the early days of Hollywood among other intriguing subjects. The man could make the directions on a shampoo bottle sound riveting, he was industry royalty of the highest pedigree and a magnanimous spirit. I could hardly believe my luck to share time with him.

On set Miguel drank water only. No coffee or snacks. He said he didn’t drink alcohol anymore either and he sure missed Scotch. I was impressed with his ability to forgo the craft tables full of easy grab sugar rushes and all-you-can-drink coffee. He didn’t even seem tempted. He was studious and continuously refreshing his lines when he had big scenes. Sometimes David gave him lines to deliver that weren’t in the original script. It was serious pressure and Miguel always handled it with dedication and grace. If I asked Miguel to run lines together he was always game. Miguel was a total pro. Working so close with him was a master class for me in acting and poise. 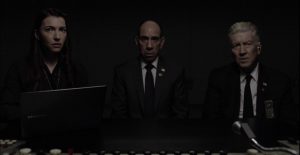 CB, Miguel and David in Twin Peaks: The Return.

Miguel was playing a lead character, Owen Granger, on NCIS: Los Angeles while we were filming Twin Peaks : The Return.  The absolute only way that David could get Miguel on the show was if the crew agreed to work on  Saturdays as his weekdays were taken with his other gig. This crew was already working long hours in a high pressure situation. Weekends are coveted. This was not a welcomed proposition and David couldn’t, wouldn’t force anyone to do it. Everyone had to be on board. But David had a way, and Twin Peaks : The Return had a Destiny, and Miguel was a part of it. Every cast member and crew member were a part of it. We all felt it was something quite special and rare. If there was any degree of push back initially, it soon evaporated.  I would bet a bag of gold that not a single crew member or cast member that may have have been disappointed to work a bunch of Saturdays regrets doing it. Albert Rosenfield brings something so great and singular to the world of Twin Peaks, and we were all so blessed to create art with him.  Saturdays were a minuscule sacrifice. We were given a profound gift. 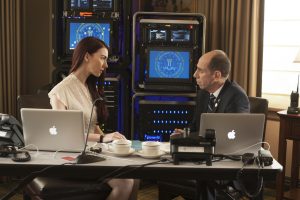 Chrystabell and Miguel Ferrer in a still from Twin Peaks. Photo: Suzanne Tenner/SHOWTIME

Miguel was a gentleman

When he talked about his wife, his eyes sparkled. He gushed about how proud he was of the three boys in his life and how much he loved his pets. When he shared anecdotes about his mother—the one and only Rosemary Clooney-  I hung on every word. As a child he had no inkling of how “cool” she was and until he was about 19, she was just ‘mom’. I found that utterly fascinating. He spoke of her with reverence, love and some sadness too. He said he’d always loved acting, but the idea of pursuing it and potentially being in the shadow of his father, Jose Ferrer’s, tremendous talent and accomplishments kept him from following that passion early on and he chose music instead. He wouldn’t end up being able to escape his Destiny in film and television for long though, to the benefit of the rest of the world. 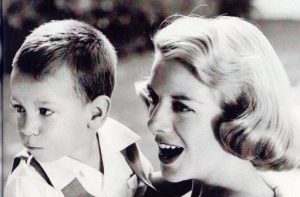 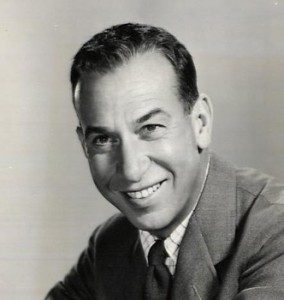 His stories about starting out as a musician and playing drums for the likes of Duke Ellington(Duke Ellington!!) and Keith Moon (Keith Moon!!) were particularly endearing for me, because of my background in music. It seemed as though he was a unfairly blessed to have the gift of music and acting so abundantly, but Miguel was the product of a world class singer and a renowned actor. He got the goods full on from both sides. The thing was, in my experience of Miguel, brief yet poignant, it couldn’t have happened to a nicer guy. 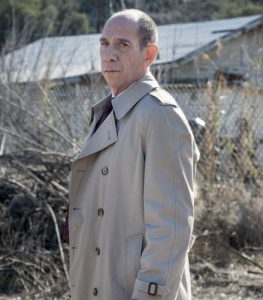 Miguel as Albert on Twin Peaks: The Return

I loved seeing how Miguel and David had a soulful connection and deep mutual appreciation and respect. They didn’t spend much time together in everyday reality, but that is perhaps one reason why David put so much energy into bringing Twin Peaks back: because he would get to spend quality time with so many people he was fond of. It was an absolute joy and incredible gift to have been able to share so much time with David and Miguel on set. I did not take one moment of it for granted. I had no idea that Miguel would not be in his body much longer at the time we were filming, but the level of reverence I felt for the opportunity of working with him was inherently present. I looked forward to his good hugs. I loved giving him big smiles after his fantastic deliveries. On set we were pals and also he was a mentor for me, and on the show  he was my senior colleague I wanted to impress and I admired him greatly. Albert looked out for Tammy and Miguel looked out for Chrystabell. Don’t get me started how the dynamics between the characters in Twin Peaks were so (seemingly mystically) aligned with the people playing the roles – to the degree my mouth hangs open in awe when I think about it. Twin Peaks : The Return and practically everything about it is steeped in cosmic alignment. I think this has everything to do with David being a meditator for more than 40 years. The veil is butterfly- wing- thin between art and reality.  And the ice cream on the cherry pie is that Miguel gave a parting gift to the Twin Peaks family and we have it to cherish forever more. 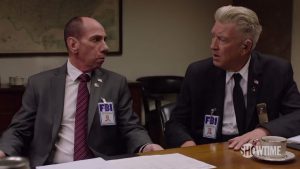 I was shocked and deeply saddened when I found out that Miguel had passed on. I kept staring at his picture on the computer screen—his warm, kind eyes. All the memories of his gracious nature flooded me. Compassion for his family to lose such a phenomenal person overwhelmed me. He was one of the good ones. Miguel immortalized as Albert on Twin Peaks and Twin Peaks : The Return is a great comfort and a fitting way to crystalize this wonderful and talented human in pop culture history. Chrystabell will miss Miguel dearly, and Tammy will mourn the loss of Albert, and feel lost for a time. Hopefully we’ll all meet again someday. A girl can dream.

With Love, Admiration and Respect,

33 thoughts on “Unfairly Talented and 100% Deserving. My appreciation post for the Great Miguel Ferrer.”