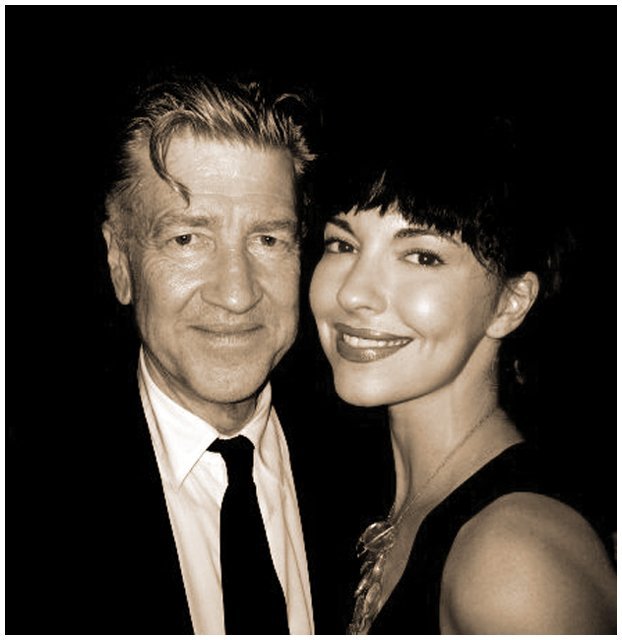 Significant Doesn’t Begin To Cover It

I can’t overstate David Lynch’s positive influence on my life. His strongest impact occurred when he introduced me to Transcendental Meditation (TM). By example, he showed me how TM can strengthen a person’s resilience, dedication, compassion and creativity. David lives daily as a fount of creativity, and has an extremely proactive relationship with his art in many mediums.

I saw that TM could be my way into my own deep creative energy—it can also give me a glimpse into his creative process, because I feel like I have access to that same infinite source of creativity and awareness.

Before I was introduced to David by someone who suggested we collaborate musically, I had no idea that he was a composer or musician. Indeed he approaches creating music from a different angle than most. From my perspective, David sees the music as a path to the feeling. The feeling emerges during recorded improvisational sessions in his recording studio he calls “experiments”.

“This is all intuition for him. He’s not worried if something isn’t ‘right’ from a musical perspective in a classical sense.” – Chrystabell

With the fantastically sharp and talented Dean Hurley at the helm of the console running the session, David explores with musical tools he likes to use to invoke the feeling. Once the experiment is starting to effectively convey a mood he knows he getting somewhere. He adds an element he thinks will help coax out that feeling more or takes something out to see if it’s getting in the way. This is all intuition based for him. He’s not worried if something isn’t “right” from a musical perspective in a classical sense.

A passing bass tone may clash musically speaking with the guitar reverb or he may hang on an A chord for an extra measure in a way that would make no “sense” to a working musician, but that is unimportant. He’s concerned with how the feeling is being brought forth or not by what is happening.

Over the years I’ve gleaned that this is generally how it goes down though I am not in the studio during these experiments. If one of these sessions has yielded a feeling with the music and David thinks that feeling would be enhanced with my voice and essence, I am brought into the equation. This unusual approach of ‘feeling’ being at the forefront of a composition and paramount above all else has affected me greatly. It’s a reminder not to overthink when making art.

Once I get to the studio, he plays me the music, he shares the feeling. Consistently his compositions speak to me on the deepest levels. If while I’m hearing the music the melodies start coming out of me almost involuntarily,  I know we can cook something up.  At that time, he’s likely to write simple yet soulful and poetic lyrics on the spot on his lined yellow notepad. Or maybe he goes downstairs to get some lyrics or poetry he’s already written.

As we work, I’m touched by his calm and confidence. He is so confident and calm that he inspires that within me. Even though on some level it’s utterly nerve wracking to be in the position of improvising melodies that will further invite the ‘feeling’ to emerge, it’s such a thrill to have the challenge and to be in such good hands.

“When my emotions are intense, he helps me use them to reach deeper, to seize the gold that shimmers and sparkles but is just beyond my grasp.” – Chrystabell 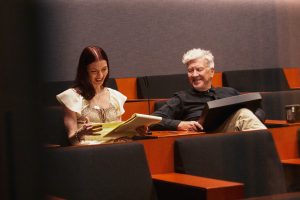 David is an expert at reading energy. In collaborative session, he helps guide our creative process to a fruitful place. Sometimes I can nail a vibe right out of the gate (hello Swing with Me), but sometimes I find myself searching in vain for the right melody, the right texture, to take our track to the next level. I get exasperated; I feel like I’m trapped in a feedback loop, but David doesn’t let my impending fit of frustration drag us down.

He might become slightly miffed with my inability to navigate our process in that moment, but he always leads me to transmute my anxiety into empowerment. He focuses his attention on me with powerful intent, and he uses his intuition to find the right way, in that specific moment, to reassure me. He knows when to push, when to try a new angle, and when to take a break. When my emotions are intense, he helps me use them to reach deeper, to seize the gold that shimmers and sparkles but is just beyond my grasp.

David has confidence—not only in himself and his own talent, but also in me. And the fact that he has confidence in me inspires me, in turn, to be confident. It’s a spiral effect, and it lands us in a gold mine.

From what I see, David is dedicated to his art and his ideas. He celebrates them and doesn’t take them for granted; he surrounds himself with the tools and space he needs to create in any medium. He’s a facilitator. He may wake up and be inspired to create a script, a song, animation, a painting, even a table or chair; whatever he conceives, he can create—usually without ever leaving his home. I think that ideas come readily to David because they know that he has the heart and the space to give them life. He calls to them by making room for them.

David has taught me not to cover up good art with extra fluff. On my own, I feel compelled to add layers and layers of synths, guitars and endless stacks of vocal harmonies and counter-melodies to all the music I make; David has taught me to hold that back. I still love doing it, but I’m learning to recognize that if a song needs too much “other stuff” in order to come to life, perhaps the main theme is weak. A voice holding a single pure note in a beautiful soundscape can be such a powerful thing.

You Know Things from the Inside

David has strong resolve. He has the courage to act on his intuition, and I’m grateful for that—his intuition led him to take a chance on me. When he cast Twin Peaks, David could have cast a renowned celebrity in my role; I know that many well-established actors would have jumped at the opportunity to be on the show. But, based on his inner guidance, he has instead cast this little-known singer from Texas. A studio exec would say it was a risky decision, or even recklessness! But David trusts that guidance, and I would venture to say it’s worked very well for him.

I have learned to tap into my inner knowing, too, with great assistance from TM, which helps provides clarity for the inner communication. And when I know I need to trust my intuition, maybe even when it points to something some may consider reckless,  I think of David. He is my shining example of how trusting the power of intuition can lead to extraordinary results. 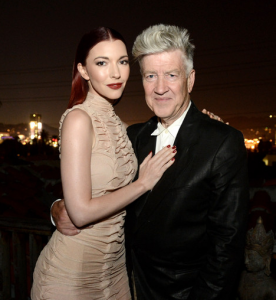 On the balcony of The Masonic Lodge at Hollywood Forever Cemetery before my show. 2015.

I’m so on this TM bandwagon it’s not even funny. It’s such a win. It’s so simple and profound. You have no idea what is happening or why it’s happening(at least I don’t) BUT SOMETHING IS HAPPENING. By example, David has shown me the potency of Transcendental Meditation as a life practice. In my own life, it has been a remarkably powerful mental tool. TM in the AM and PM is what they say…

When I practice twice daily, I am infinitely more in-tune with my intuitive nature. My ideas flow readily, and steadily. My sense of well-being helps me to be calm and confident; my energy increases, and I’m able to dedicate myself fully to my art and my work.