Dailybest is an online magazine dedicated to the best of digital culture and the Italian and international creativity.

Simone Stefanini: Who had the idea of the “Night Ride” video, which seems inspired to B-Movie horrors? Was it fun to play and perform that kind of character?

Chrystabell: The concept, design, feeling and story were all conceived by the director and editor Joseph Skorman. It definitely has a b-movie horror and grindhouse vibe and I was really into it because it’s a kind of character I don’t usually get to explore. It was absolutely enjoyable for me get to play someone much darker than my usual sensual ethereal part that comes the most naturally. 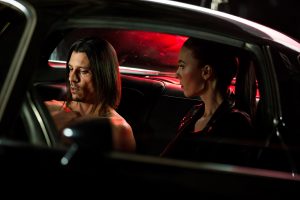 On set of the music video for Night Ride with director and co star Joseph Skorman.

Simone Stefanini: David Lynch once said that the first time he saw you, you seemed like an alien, “the most beautiful alien ever”. Have you ever feel like an alien before?

Chrystabell: I know that when I see pictures of the Andromeda galaxy I have the overwhelming feeling of “home” – also when I visualize unconditional love or go to my “happy place” it’s filled with purple and iridescent spirals! I am a dreamer and a mystic with a big imagination and I absolutely believe in life beyond this planet. I find it utterly fascinating that anyone could believe otherwise. Thinking about alien life beyond Earth is actually quite comforting to me. When David gave this quote to the press, I took it as the most wonderful compliment. It never occurred to me that someone else with different sensibilities might not see it that way. 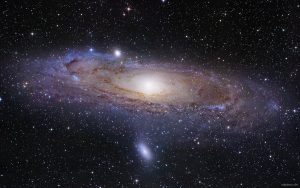 Simone Stefanini: You and David Lynch are collaborators, in music and now in the new Twin Peaks TV series, which we look forward to see. What can you tell us about that experience? Who will be your character?

Chrystabell: I am unable to share even the smallest detail. This is part of a contract of course but it is also David’s request. I respect his wishes utterly in this matter and I understand why he wants it to be so mysterious for as long as possible. There are so few true surprises anymore. Hopefully the secrets won’t be unveiled until the curiosity simply cannot be tolerated any longer…

Simone Stefanini: Is it easy to work with David Lynch as director?

Chrystabell: David, as a director and as a friend, is straightforward, humorous, encouraging and compassionate. He is thoughtful and extremely effective with how he delivers direction and I have never seen him lose his cool.

Simone Stefanini: What can you tell us about your new album, which will be produced by John Parish and will feature as guest members of Portishead and Sunn O)))?

Chrystabell: The new album is a new direction. But not so far away from my work with David that my fans will feel abandoned. I chose carefully who would follow David as my producer. I wanted someone I had great confidence in and who understood where I am as an artist. I believe both David and John have a keen sense to preserve the integrity of a song, not over produce or fill it in with extraneous bits that eat away at the soul of a song, which can happen easily. Both Adrian Utley of Portishead and Stephen O’Malley of Sunn O))) were musicians we connected with at some point on tour and wanted to collaborate with. Adrian is also very close to John Parish, and things happened organically and gracefully to invite each to take part and all the guests on the record, even though the genres each were known for were quite different, somehow fit beautifully into the world we created.

Simone Stefanini: What is like to be a muse?

Chrystabell: It’s a pretty abstract concept. In my mind, a muse inspires creativity and ignites inspiration. These things are elusive and ethereal.  I think when someone feels they have a muse it’s a lot to do with chemistry. If you feel at ease, maybe a deeper sense of peace when you are around a certain person, this is a fertile territory for ideas to emerge. Conversely a muse can be a lover or someone who has mistreated or confounded you, which is also very creatively inspiring! In the end, an artist is not an artist without ideas and creativity flowing, so if you are a muse to someone it can be a powerful dynamic.