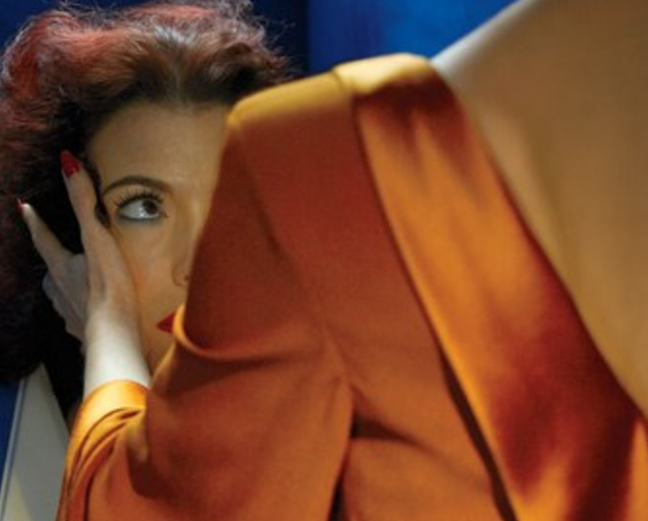 Chrystabell was featured in W Magazine’s May issue titled, “The Jewels In His Crown” where Lynn questioned Chrystabell about her experiences with David.

Lynn Hirschberg: Did you always want to act?

Chrystabell: I tried to act when I was a young, and it just never seemed like it was taking off for me or catching fire. It wasn’t my destiny, and I joined a band when I was 18-years old. Music was the thing I really, really wanted to do with my life.

Lynn Hirschberg: What was your first audition?

Chrystabell: There were quite a few from ages 13 to 18, but none of them ever really worked out. I did Star Search when I was like 16.

Chrystabell: Yes. But as a spokesmodel, not as a singer. This was the pilot for the Spanish Star Search. I’m actually from San Antonio, so I had to pretend that I was Latina in order to get the job. I basically got into a fountain at Sea World and splashed around and I answered some interview questions clumsily in Spanish and called it a day. It was a bit awkward but it was a great experience.

Lynn Hirschberg: Did you have an outfit you wore when you would audition?

Chrystabell: You know that was in the ’90s. Those were not the best times for fashion.

Lynn Hirschberg: Although they’re coming back.

Chrystabell: They’re coming back. I don’t understand but I think it was always about spandex for me, quite frankly, because it wasn’t until later in life that clothes were being made for ‘40s figures. And so before then if you had curves you just had a few options. And one of the main ones was spandex. I was wearing tight because I was bigger growing up and I had a lot going on top and a lot going on downstairs and then a little waist, but if you didn’t accentuate the waist you didn’t quite feel yourself. I definitely was always about the silhouette. I like to make shapes and so spandex helped that.

Lynn Hirschberg: How did you meet David Lynch?

Chrystabell: David and I met in his recording studio, when I was brought there by a dear friend of his who had the intuition that David and I would get along. David and I met and had this lovely connection and started to make music together that day. Wrote our first song together on the day that we met. And yeah the rest is history.

Lynn Hirschberg: When did he start to talk to you about acting?

Chrystabell: You know, with David it’s always an adventure and I just know that I’m in good hands in whatever capacity we’re creating in together. So when David asks me to be a part of things it’s always a bit mysterious. And this latest venture was no exception. The way he approached it was with a little twinkle in his eye, and I couldn’t do anything but say yes excitedly.

Lynn Hirschberg: Had you been a fan of Twin Peaks in the earlier incarnation?

Chrystabell: Of course. Of course. When Twin Peaks first was on the air I was pretty. I loved how the music and the visuals came together in a way that was compelling in a new dimension for my little being. I was feeling things I never felt before and I was absolutely addicted. I think so many of the nuances of the show were way over my head, but there was something that I was getting. There was something that was being infused into my little being that was pretty special and singular. Nothing had ever made me feel that way.

Lynn Hirschberg: And you wanted to know who killed Laura Palmer.

Chrystabell: Yeah. Or not. I don’t even know that I understood even the concepts but I was just enthralled.

Lynn Hirschberg: Are you generally a David Lynch fan?

Chrystabell: I have watched David’s films throughout the years like just taking them in and then digesting them and then three years will pass and I’ll watch the movie again and I’ll have a new layer of experience in my life and new insight in my own reality and then I get all these new aspects of the film that I never saw before. Those are the gifts that keep on giving

Lynn Hirschberg: Did you ever see Eraser Head?

Chrystabell: Okay my mother would never let me see Eraser Head. Not until I was well into adulthood did she say, “At your own risk, Chrystabell, you can watch Eraser Head at your own risk. It will change you.” And I finally did. And I found it to be so charming and of course unusual but now with this relationship I have with David, I just see David. I just see his personality and his sweetness and his quirks and the way that he sees life through this super unusual, but yet somehow strangely comforting. It was one of those movies where I just feel in love with him a little more after seeing Eraser Head. After all those years I had worked with him for at least 15 years before I actually saw it, and I’m really happy it worked out that way because I got to see it after knowing David.

Lynn Hirschberg: Do you have any favorite characters?

Chrystabell: The women are all so powerful and terrifying. I definitely like Patricia Arquette’s character in Lost Highway. That, that was pretty soul opening for me and, of course, anything Laura Dern touches is velvet.

Lynn Hirschberg: Who is your girl crush?

Chrystabell: Tilda Swinton. I just – I don’t know what planet she is from but I would like to visit there and then meet more of her. That’s probably a very popular answer. Also, Liv Tyler, she’s so cute. And then Cate Blanchett, Viola Davis… I’m really into her.

Chrystabell: I like tall. I like unusual beauties with a lot of expression and I am such a fan of women. I love women. I respect women. I’m just way into women, so I could go on and on and on.

Lynn Hirschberg: Where was your first kiss.

Chrystabell: In front of the Galaxy Theater in San Antonio Texas.

Lynn Hirschberg: How old were you?

Chrystabell: Uh, 12. That was my first like official kiss. I mean I think that I was like making out with my friends, you know, at like age six or seven. Those were good times, but we didn’t really know what we were doing we were just experimenting and exploring. But around 11 or 12 you were a bit more intentional and it’s not just the kiss, it’s the lead up and the aftermath and oh what beautiful times. Actually I got to see my first kiss. We reunited in San Antonio and I wondered if he remembered and he wondered if I remembered. And then we were like, “Do you remember?” And he was like, “Yeah.” And I was like, “Yeah.” And it was a really sweet connection.

Lynn Hirschberg: Were you expecting it?

Chrystabell: I think there was anticipation and hope but I was a little awkward growing up, so I wasn’t sure if he was going to be open to the kiss but he was game. He was a trooper. Bless his heart.