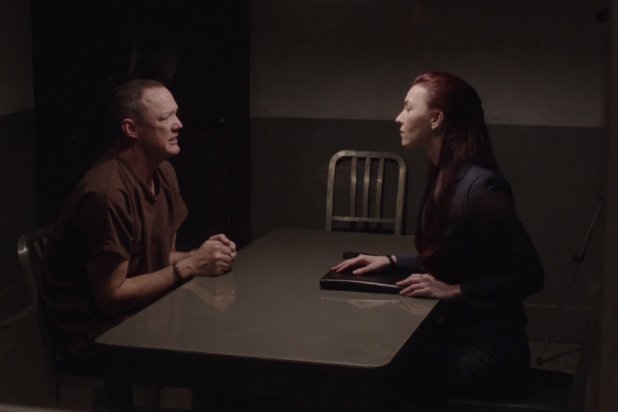 But before I get to the interrogation scene – a note…

You are Not Alone : Cast Members of Twin Peaks Don’t Know What is Happening Either 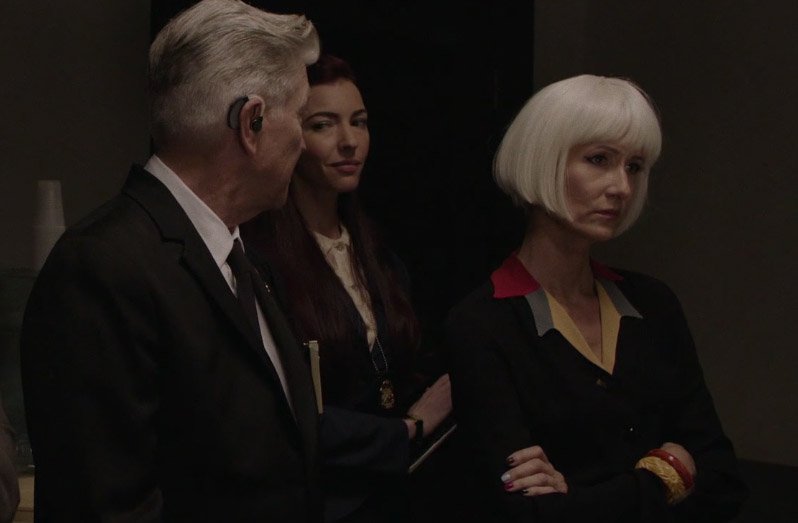 Right now, I’m on tour in Spain with no access to Twin Peaks…

I woke up this morning in Madrid after Part 9 of Twin Peaks had played in the US and overseas. In some ways, I wish I knew when Tammy was going to pop up so I could emotionally prepare – but in actuality it’s such a thrill to be discovering the sinuous plot lines of Twin Peaks, and certainly where they land in the season, along with everyone else. Yes, I do know what #SpecialAgentTammyPreston (please forgive the hashtag indulgence, or don’t, but use it) does and says in the season, but as you may know from other cast members sharing about it during interviews, no one (except for Kyle! as mentioned) received the script in full before filming(or ever for that matter). We received our own lines and the lines directly preceding and following.

“But were there page numbers on your script?” you may ask and the answer is yes and if my investigative skills were as on point as Tammy’s, I may have cleverly deduced when the plot lines she took part in would land in the series arc, but with so many unknowns even Tammy would have been hard pressed to make even a vaguely accurate prediction. I mean, no one who wasn’t directly involved could have seen part 8 coming.

I would venture to say that most of those even involved were not aware to the extent it would twist, stretch and beautifully violate the medium of television. But I digress.

The interrogation scene was the very first scene I shot for the whole series. - ChrystabellClick To Tweet

When Tammy had her big interrogation scene I didn’t know it was coming and I was seeing it for the first time along with everyone else. Ok, full disclosure, at the time I am writing this, right now on the plane from Madrid to Milan on July 10, 2017 at 21.49, I have not actually even seen part 9 because Showtime does not work overseas. But a friend from San Antonio posted 6 minutes of the interrogation scene on Facebook today and this is how I know it happened. Twitter gave me some helpful hints too. Also, I am hopelessly addicted to episode recaps, no matter how cock eyed, no matter how nebulous, because I always learn something from them. And the recaps of the shows I have not seen are particularly necessary for me to stay sane, even if it just makes me want to see the dang thing more. It was from youtube that I learned about the smoking scene with Gordon, Diane and Tammy also happened in Part 9. (Stay tuned for a future post about that.)  It is agonizing not to be able to see the show but there is a strange comfort in consuming bits of it to tide me over. But it’s also highly unsatisfying. Alas.

Because of the European tour coinciding with the airing of Twin Peaks, I have been in a different country for nearly every single Sunday and each country has it’s own network partner, which has their own sign up system, which inevitably cuts me out toward the end as my US billing address never fits in the forms! What’s a girl who is in Twin Peaks, desperately wants to watch Twin Peaks, but is currently on a European tour, to DO? Hunting down the torrents is not something I resort to for many reasons, and I have been in some countries recently where torrenting often results in a knock at the door and major fines(cough, Germany, cough cough)

My plight of not being able to watch Twin Peaks aside, I am inclined to share a bit of behind-the-scenes information about the lead up to the interrogation scene because it seemed like good insight into how David has handled Twin Peaks in a way that does nothing to demystify his process, but may help others to climb out of their (glass) boxes when making art.

The interrogation scene was the very first scene I shot for the whole series. Also the very first scene I have ever done on a TV show ever. The Saturday before filming, I drove down to LA from Oakland to meet with David to discuss the upcoming filming and Tammy’s character. During this meeting we sat at the concrete table outside the studio house where we have spent many many hours talking about life, drinking coffee and smoking cigarettes between recording sessions. But this was a different situation and there was a specific focus of our conversation. I was about to officially step into the role of Tammy Preston in front of the camera, not just reading her lines in my living room. David wanted to check in with me about how I was feeling and if I had any questions. We had discussed Tammy before of course but it was time to reestablish the lines of connection. I learned in this conversation that the very first scene I would be filming was the interrogation scene with William Hastings. He was surprised I didn’t know. I was surprised that he had the faith in me to do THAT scene on my inaugural day of shooting.

I had posed the question to David... if he wanted me to get acting lessons and he said NO! - ChrystabellClick To Tweet

Being the somewhat studious person that I am by nature, I knew the lines backwards and forwards. My sweetheart Joey practiced them with me a lot. He did a great/terrible David Lynch impression as Gordon Cole. I called the lines “lyrics” all the time. I thought about the lines in my sleep sometimes, upon waking from sleep, as well as before falling asleep. But this would be the first time I had acted in anything like this and I was starting at the top, and you know what place there is to go from the top? You don’t have to be in the FBI to figure that one out.

I had posed the question to David when he first asked me to be a part of Twin Peaks as an actress if he wanted me to get acting lessons and he said NO! because then he would have to un-teach me the things I was taught. So I was going into this thing with zero pro tools for TV acting but 22 years onstage singing and the knowledge that David thought I could do it, and I was hoping that currency would get me something.

David and I continued our chat. I let all the information he was giving me and the moment  sink in and then just basked in the wonder of it all. A kind of cosmic bemusement. I’m sure I shared that with David in so many words. There I was, sitting with this extraordinary person who had such confidence in me that I could pull off this thing! I wanted so much to do justice to Tammy. I am as committed to her as she is to the FBI.

After a good solid #TammyTalk (! Use it), we then spent the next good while chatting about life. David is a fantastic conversationalist and I was very happy to be there. In fact, just sitting with him was making me feel more excited and capable by the minute. How does he do that? But he had another surprise in store for me to further help me take on Tammy. Take her right on to the next dimension.

That Monday, after getting dressed as Tammy for the first time (how amazing did it feel to wear that FBI badge? SO AMAZING) and walking on set, I wandered around a bit dazed and in awe. The crew was busy getting ready to shoot the scene. I tried to stay out of people’s way. In the midst of it I met Laura Dern for the first time(I am a huge fan of hers for years) and Matthew Lillard(I am a new fan of his), who would finally be performing the lines on camera that I had been studying for months. After all the build up, it was finally happening. I was a mixture of ecstatic and terrified. I was holding on to my calm by a robust thread, and if I thought about it too hard, I would get sucked into the madness of what I was about to do. But I didn’t let myself go there out of self-preservation. I was trying Not. To. Go. There.

As many thoughts swirled in my head, David called to me and I went to stand in front of him at his director’s chair. He took my hands. The look on his face was calm, composed, peaceful and determined. Or something like determination. Focused intention maybe. He looked at me. We locked eyes. He continued to hold my gaze. Neither of us said anything. The bustle of preparing for the shot went on around us. David and I continued to lock eyes. I was aware now that he was downloading information. This is the only way I can explain it.

We weren’t staring at each other or gazing into one another’s eyes, he was looking in to me and I was receiving it and looking in to him. Something deeper than just looking or seeing. As we held this position, I felt my confidence rising and my ease increasing. My breathing became deeper. I felt the greater purpose of it all sink in, the realization that this and everything else was meaningless, and then the massive significance of it again, then the utter nothingness, then the divine purpose, and over and over this cycle.

There was no reason to be nervous, just step into my Destiny. None of it meant anything, and yet it was inconceivably important all at fucking once. Cool. Thank you David. I can work with this.

After what felt like a very long time but was probably around 3 or 4 minutes, our download session was complete.

We shot the scene. I had a ball. Matthew was amazing. Tammy did her job. I would never be the same after filming Twin Peaks.

Let Chrystabell know you are reading her blog!

How your wonderful birthday messages make me feel!

Thursday I don’t care about you #strangeasange

This coffee mug is so functional and practical and

Happy Twin Peaks Day my friends from me, Tammy & m

🌸 After the storm...well doing my best to get h

Darlings! 🧸❤️🐴 Our dreamy version of “

Impossible to measure the impact and influence thi